Monsterling: changed our World ... read it! 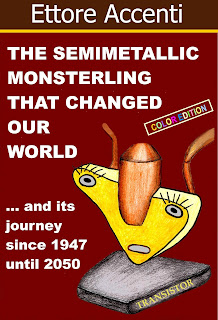 Just published in English. I worked for many American companies since their foundation as a representative. Student, professional people and technology lovers will find in this book, unique in the world, more than seventy years of technology and a prediction of what will happen in this area until the year 2050.

I collaborated with many companies (Intel, Apple, Amd, etc.) and with their officers, among them Robert Noyce, Gordon Moore,  Federico Faggin, Stan Mazor, Mike Markkula, Steve Jobs, Mike Spindler,  Terry Jones, Jan Black, including someone that  is not here anymore like Andy Grove and Tom Lawrence.

In the calm of my new residence in Switzerland I wrote a book thanks to the numerous documents and photographs from my archive and I decided to publish it especially for young people.
I know that young people (I have 4 children and 10 grandchildren) usually do not read the many and heavy volumes in circulation, so I attempted to write something new.

The book is available on Amazon as eBook, Paper BW and Paper Color and an excerpt can be downlowded at the links below.

These titles are available at Amazon as eBook Kindle, BW and Color Paperback.